Turmeric! Yes, just the mere mention of the plant itself takes us back for a glimpse of history more than 4,500 years old. Archeology records show us that pots discovered near Delhi, India revealed residue from turmeric, ginger, and garlic dating back as early as 2,500 BCE. Since around 500 BCE turmeric has been mentioned in the treatises of Ayurvedic medicine. The literal meaning of “Ayurveda” is “āyuḥ life, vital power + vedaḥ knowledge. Ayurvedic medicine seeks to treat and integrate Mind, Body, and Soul by adopting an inclusive approach, especially by accentuating diet, herbal remedies, exercise, meditation, breathing, and physical therapy. Turmeric has been honored with different terms in Ayurveda, including Matrimanika, meaning “as beautiful as moonlight”, and also jayanti, meaning “one who is victorious over diseases.”

The most energetic and vital ingredient in Turmeric is Curcumin. Curcumin has significant anti-inflammatory properties, and its powerful antioxidant advantages have been shown to protect healthy cells, particularly those found in the colon, from cancer-causing agents. Furthermore, it aids the body in destroying mutated cancer cells before they have had a chance to spread to other areas. Turmeric also helps to lower cholesterol and prevent heart disease. Turmeric, particularly Curcumin, is so potent, it has been used for the healing of wounds, bruises, and even arthritis for millennia in Ayurvedic medicine. More recently, Curcumin has been shown to help relieve joint pain associated with osteoarthritis of the knee. Additionally, curcumin added to facial creams and lotions helps optimize the overall glow of one’s skin. Best of all, unlike over-the-counter drugs, Turmeric/Curcumin has no toxic effects on the body.

Hannah Glasse’s cookbook, The Art of Cookery Made Plain and Easy, published in 1747, also mentions the use of turmeric for making pickle and other dishes. In an advertisement from 1784, in England, a curry powder which had turmeric as one of its main ingredients described it as, “Exceeding pleasant and healthful”- “renders the stomach active in digestion – the blood naturally free in circulation – the mind vigorous – and contributes most of any food to an increase in the human race.” In the United States, curry appeared in the 1831 edition of Mrs. Mary Randolph’s Virginia Housewife. Though it may seem a recent ‘fad’, Turmeric is actually a time tested and true component for a more healthy and happy life! 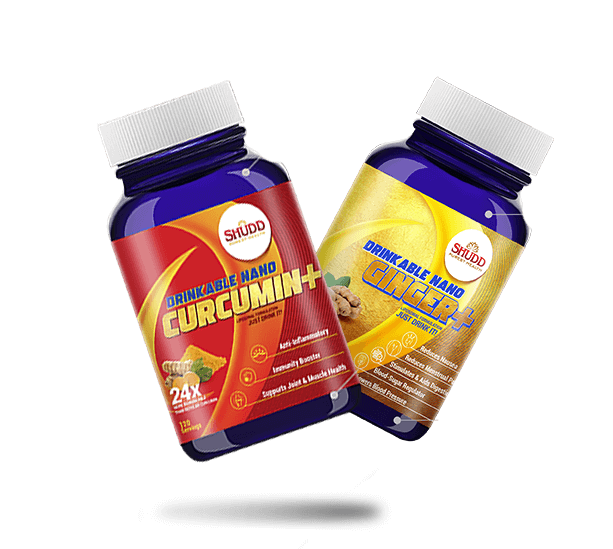 Ginger root has a range of health benefits, including improving digestion, blood sugar levels, and harmful cholesterol levels. The rhizome, more commonly known as the root, is what you are likely familiar with. The root is spicy and peppery in flavor, with loads of medicinal properties. It’s used all over the world in culinary and clinical applications—both for good reason.

Ayurveda literatures highlight administration of ginger in both of communicable and non-communicable diseases. Recent advances in analytical chemistry, cytology and microbiology recommend application of ginger in various disease conditions as well as recommendations in Ayurveda literature. Ginger is known to be effective in viral infections and revitalizing the body at disease conditions according to both of Ayurveda and modern concepts through enhancing appetite, immunity and re-boosting weakened physiological functions of the human body.

Ginger is your new best friend for supporting everything regarding digestive health. The more efficient your digestion is, the more energy you will have because researchers have found that approximately 60 percent of your body’s energy goes to metabolism. If ginger can improve digestion, your metabolism will improve, and energy will be more available.

Furthermore, Ginger has been shown to improve blood pressure (in conjunction with medication) by acting as a vasodilator—it expands your blood vessels. This is helpful for increasing circulation in the body, which reduces the overall blood pressure throughout the body.

Ginger is also known to be beneficial for cholesterol levels. Ginger has been found to reduce cholesterol levels—specifically reducing low-density lipoproteins (LDL). Another incredible benefit of ginger is that it helps regulate blood sugar levels.

Additionally, whether it’s from motion sickness, morning sickness, post-surgery effects, chemotherapy, or pregnancy, nausea is not an experience anyone wants. Ginger has been shown to be an effective remedy for nausea related to pregnancy and chemotherapy.

Researchers have found that ginger is an effective antibacterial for many drug-resistant bacteria in clinical applications. In oral health, for example, two types of ginger have been shown to inhibit the growth of pathogens that contribute to periodontitis (inflammation of the gums that is caused by gum bacteria).

Also, many women know how debilitating menstrual pain can be. There are over-the-counter pain medications dedicated to this specific pain, but ginger may also provide relief. One study found that ginger is as effective as ibuprofen in reducing the pain associated with dysmenorrhea (painful menstruation) in women. Next time you experience cramping during your menstrual cycle, give ginger a try!